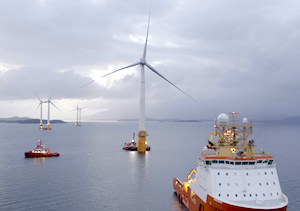 Five floating turbines for the Hywind offshore wind farm this week began their journey from Stord, Norway, to Buchan Deep, 25 km east of Peterhead in Scotland, according to Abu Dhabi-based Masdar, a co-owner of the project.

The 6-MW turbines, which are placed on top of ballasted steel cylinders, were assembled outside Stord this summer and now are being individually towed to Scottish waters, the company said. Each turbine’s journey takes four days of sailing across the North Sea. Final installation procedures will take two to three days per turbine, with installation scheduled to be finished by the end of August.

In addition, the loadout of the cables for the project will begin in Halden, Norway, the company said. An installation vessel will go to Kristiansand, Norway, to pick up vertical anchors and buoyancy modules before heading to Peterhead for pull-in of the export cable. The cable will then be laid out in Buchan Deep with the second end connected to one of the floating wind turbines. After installing the export cable, the remaining four infield cables will be installed by the end of September.

Earlier this year, Masdar acquired a stake in the Hywind project, which is majority owned by Statoil.