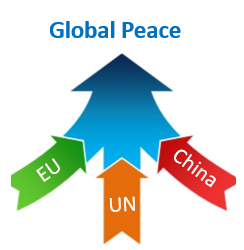 Human civilisation already exceeded long epoch of a Hunger and entered in ages of Health and Security. The ground for wars and occupations disappeared now. Some occurring local and international conflicts are not connected to the hunger. They related to Self-Governance needs mainly. So, the peaceful opportunity to arrange the Global home for peaceful common life occurred. It is true, that the Peace can be global only. Local peace needs of arms and guns for defence from nonpeaceful neighbours. For avoid wars we need to convert nonpeaceful neighbours to friendly citizens of Global Union. There three main alternative roads to Global Peace are defined: a) Communist Union; b) United Nations and c) Global Union.

The sociogenic attraction’s Law destines, that humans and societies are focusing to the most qualitative growing social centres, who prefers introduction of innovation against existing old technologies and approaches. It is any surprise, that China is the most developing 1412 million people country, which grows acceleratingly, thanks to widely opened doors for progressive innovations. The Western World, including USA, European Union, UK, Norway, Canada, etc., still in stagnation many decades, because they keep own economy on old technologies, which stops progressive innovations.

Western World are not against progressive innovations, but they plan to transit to ones until 2050 year, when China pushes innovations now, not waiting for so long time. The main stoppers of progressive innovations are combusting energy (coal, oil, gas, nuclear, etc.) business, who do not want to lose their easy income and power. They rule political parties and Governments for stop progressive innovations. Taking not enough care for remove barriers for innovations, Western countries do not want to recognise this Chinese advantage and soothe they-self, by naming China as communist, not democratic, Ungurean's killing, etc., country. Western countries try to compete with China by constructing custom duties barriers, limit communication and enforce military confrontation. However, these resistive actions aren't' constructive, don't lead increasing of innovation level of Western countries, leads nowhere and cannot stop innovation train of China.

If the situation still like now, Western world will transfer leading position to China, who will dominate in the World. For assure market for innovations, China will take care to unite overall World nations under communist umbrella, create Global Communist Union and assure the Peace in the World.

However, the last nonprecedential anger of China's officials and destruction of  trade links  against small country Lithuania in reason, that she keeps diplomatic relation with Taiwanese people, discovered very low culture level of this big nation.  What required significant reduction of China rating, as possible leader in global peace creation process.

United nations are existing club under 331 million population United States of America initiative to keep Western civilisation needs to demonstrate peaceful decision of international conflicts. More as hundred years still alive ideas of future World’s State. The World’s Constitution and many projects on common World’s governance and Peace were created. Really, this organisation has not forced for assure real Peace, because the most powerful States are free to act according to their decisions and they have veto right in UN assemblies. In this connection, any try to modernise UN will meet veto barrier and can’t’ lead to enlargement of UN power towards Global Peace.

However, the ideas of UN modernisation and enlargement still alive nowadays. Some initiatives, like sustainable development, socially responsible business, human rights, fight against poverty, etc., still in agenda of UN. The ongoing virtualisation of online communications give opportunity to talk about World’s citizen, World’s Parliament, and other advanced initiatives. However, UN has not of internal engine – core initiative group for tourn UN into highest Self-Governance level of Humanity.  It may occur if some bright persons will start gigantic work on establishing peaceful World.

EU have true understanding of own wellbeing conditionality from innovations. EU was named it-self as Innovation Union. From Lisbon strategy in 2000 years EU seeks to spend till 3% if GDP for research and development. However, until 2020 only 2,1% for this aim was achieved. As consequence, decelerating growth character confirms stagnating state of this great community. Many accepted by European Parliament Green, Blue, Sustainable growth, Circular economy and other initiatives meets strong resistance of old business, mainly related to combusting energy (coal, oil, gas, nuclear, etc.). Such black business enforced its position bay hiring political parties to stop green energy innovations like wind, solar, water and air. It keeps automotive industry on combusting engines, not opening growth opportunities for electromobility.

The false strategy to innovate energy till 2050 year leads to erosion and destruction of this advanced project, as it was provided in 2016 year by Diem25 movement if Europe will be not democratised. Considering solid intellectual potential of EU citizen, democratisation should be understood and implemented during avoidance of partocracy and introduction of Strategic Self-management system starting from family till EU and Global Union level. This enables to avoid partocratic erosion and freeing innovation introduction processes and return attractiveness of European Union, opening door for continuation of enlarging from European location to attract all World countries under Global Union peace umbrella.

The Global Union. Five tasks towards Global Peace. By Prof. Dr. Stasys Paulauskas, Strategic Self-Management Institute, This email address is being protected from spambots. You need JavaScript enabled to view it.. Klaipeda, Lithuania. 25th of May 2021.